SCOM and OMS: The agents

Both SCOM and OMS are in most ways dependent on agents installed on each server being monitored. If you have SCOM today you probably run Microsoft Operations Manager Agent (MOM) which is shipped with SCOM 2012 media and installed through the SCOM console or a SW deployment tool ConfigMgr etc.

OMS on the other hand uses the new Microsoft Monitoring Agent (MMA) which is available for download within your OMS workspace or through MSFT download center. MMA is said to be the mother of all agents which should be used by every Microsoft software that require an agent.

NB: At some point (SCOM 2012 SP1?) the agent actually got rebranded to Microsoft Monitoring Agent. It is stil not the same you get from OMS

The reason for looking in to the agents is that we one situation wher we lost contact with one server belonging to a customer (a customer of my employee Intility).

It turned out that they had signed up for OMS and configured the MMA agent to. At some point this deleted our SCOM configuration and we lost monitoring on that server.

As OMS is fast forwarding these days we will have to be proactive and support agent/servers directly reporting to other OMS workspaces than the one connected to our SCOM environment.

After some testing here is what i found is the main differences on these agents:

*I do not know if there is a limitation on how many connections an agent can have, but I have tried 5 in total. 3 OMS workspaces and 2 SCOM work groups.

At this point we plan to upgrade all agents making sure customers are able to report to their own OMS workspace without interfering with our central SCOM and OMS installations.

SCOM 2016 is also shipped with the MMA agent and is likely the same but with a different version.

Let me know if you have something to add and I will update my post accordingly.

If you extract the .MSI from MMASetup******.exe you end up with a MSI which installs the “old” MOM agent

SCOM Task to restart Agent – am i complicating…

As part of planning to migrate a large (3000 + VM) SCOM 2012 R2 environment to 2016 we will need to do a bit of agent configuration. I have created two tasks in Our SCOM console to help us add or delete management Groups from the monitored computers (when moving all agents we probably will use some other orchestration). The problem is that you will have to restart the agents HealthService to save new configuration. Since we execute the task/script through the Health service the task will fail when we attempt to restart. You may experience Your task to work, as in you will have the managment Group added, but you will not see any output.
Over the years People have published a lot of scripts that restarts the agents but unfortunately I have not managed to get them to work properly.

Therfore, i am complicating Things…

I created a script which creates a scheduled task set to run in one minute before it expires and deletes. The Whole thing Works perfectly, but there has to be another way?

I know that Microsoft have a recovery action to restart the agent when it is using too much memory and similar, but I haven’t broken Down their code. 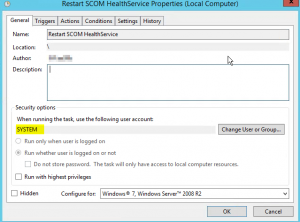 With Operation Manager 2016 we finally have the ability to Schedule maintenance for Objects.
Doing that in GUI is pretty straitght forward, altough i have seen some blog post on issues With conflicting maintenance schedules. Besides scheduling maintenance mode in the GUI we have gotten some New PS CMDlet’s to manage maintance schedules.

One of them are New-SCOMMaintenanceSchedule.

Based on this i have created the following script wich will take parameters for servername, comments, start and end date before creating a New maintenance Schedule With the supplied server Objects (Linux/Windows)

Feel free to use and please give me feedback on improvements and bugs. Beware that this Version has some limitations and little error handling.

We wanted to change how SCOM agents is installed and configured. That involved some scripting. As a part of the process we add a management Group to the agent after it is installed. SCOM 2016 is also released now so if you want to migrate instead of upgrading, you can use this script to add an additional MG.

Script will have two mandatory parameters management server and management Group name. A Third parameter is optional, which is the port number and defaults to 5723. You can save the below script as Add-SCOMManagementGroup.ps1

Recently, I was at System Center Universe (Now, Experts Live) in Berlin. During one side session i got talk to Cameron Fuller (Microsoft MVP) and I asked if he knew if anybody had used azure automation and it’s webhook capabilites in a SCOM subscription.

At Intility (my employer) we have developed an alert central which handles alerts from Solarwinds and other systems we use daily. OpsMgr is one of few systems that still tap directly in to our ticketing system, but were working on a change here. Webhooks and azure automation is one thing were looking at.

My attempt (if possible), using webhooks and Azure automation is to be able to send alerts from SCOM, and not have something query for new alerts when there nothing to handle. Cameron quickly reached out to his fellow MVPs and a few ours later i got a reply. Turns out that Jakob Gottlieb Svendsen (MVP) from Coretech had used webhooks in a recovery task. He basicly done all the work now :).

The rest of this post will quickly show how to.

Search for automation accounts in services and add a new Automation account. Use an existing resource group or create a new. After wizard is finished we should have an account assigned to a subscription.

By now you have probably read Jakobs blog and you have a new runbook in place, but i will guide you through anyway 🙂

Create a new runbook and use “Powershell workflow”. Once finished you will be sent to the online editor which is fine for now, but i suggest you download azure automation addon for ISE if you plan to do a lot of scripting here 🙂

Azure Automation PS worflow will start like this. If you add script parameter and publish where able to create a webhook. Place your normal PS script between the two curly brackets.

I have adde the parameter already, that way we are able to create webhook an parameter at the next step.

Next task is to create a webhook for your runbook. With a webhook you are able to call the runbook with a URL and also pass parameters with JSON data inside the url. (Heres where the parameter for your webhook and script comes in)

Remember, copy your webhook URL – it’s not available after it is created

After youre ‘hooked’ add paramters and define where to run. For this test i just fire it off in azure, but you can run your script on prem with the hybrid worker. Use your script parameter in the webhook data input.

You have probably added your own script inside the Azure workflow already, but here is my OpsMgrAlertHandlerTEST script which is based on Jakobs example and will output some key alert datato the console. Instead of just output it to the console i can now pass this information to our alert central by triggering a new runbook or adding it directly within this script.

From scom we will use powershell to POST alert data with invoke-restmethod and the URL you copied from the webhook configuration, right?

Our final step is to create a command channel, subscriber and a subscription to trigger the runbook. From the admin panel in scom create a new command notification channel

In settings we will add path to Powershell and a command to run. Remember. Webhook url and the parameters to POST

Inside the JSON string we will pass Computer Name, Alert name and the resolution state. Modify this by using the picker on the right side. After you have created the channel, create a new subscriber to use with this channel and finally create the actual subscription

For this test/POC i have chosen to send all information alerts to this subscription. These are mostly rules i can close (and generate) during testing.

Subscriber and channel are the two we just created.

At this point you should have:

Finally, lets test our solution. I have added all informational messages to this subscription. I will close one of those and cross my fingers. We can follow the process in azure portal

As this is totally in  a proof of concept state for us i would greatly apriciate inputs on how we can accomplish the task using other methods.

As we see, using webhooks in a subscription works quite well. But i havent implemented it in our production environment or sent it to our alert central yet. I see some issues, one being limited by how many powershell scripts we can run at once. Jakob suggested maybe we will look in to creating a connector and let us query a subscription for new alerts but i haven’t gotten around to try it out. 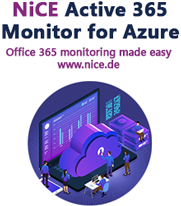